The auto maker is immediately seeking software developers, project managers, database experts, business analysts and other computer professionals to work in what will be its third of four information technology centers across the U.S. Its Atlanta Innovation Center will be located in the northern suburb of Roswell and concentrate on research and development rather than everyday processing. 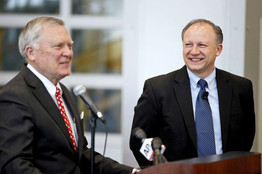 GM has been on an IT binge during the past six months as it looks to take more control of the work it now deems proprietary after years of farming it out to contractors around the world. The auto maker expects to fully staff the Roswell, Ga., center over the next three to five years.

“Our strategy is to reach the top talent in the US market and tap the nearby universities,” GM Chief Information Officer Randy Mott said on Thursday. “These are going to be the best jobs in the IT industry over the next five years since GM is on a transformation journey. They will work on everything from design of vehicles to high touch for the consumer to what is offered in our vehicles.”

At one time, the bulk of GM’s IT work was done by Electronic Data Systems, which it acquired from billionaire businessman and former presidential candidate Ross Perot in 1984. GM spun off EDS in 1996. H-P bought EDS in 2008 and has been cutting jobs ever since.

“You just assumed that a company of our stature, our size, our complexity, our global reach, that we had to have a 21st century IT infrastructure,” Mr. Akerson said. “We didn’t. We are attacking that on a scale that is prodigious. We are making great progress but it is going to take three or so years to get it done minimum. It took us 30 years to miss the train. It is going to take us three to four years to catch up.”

Chrishena Stanley is a great agent that understands the complexity of today’s market and takes the time to figure out how her clients needs integrate with it. I recommend her wholeheartedly.
-Jeff Conn, Mortgage Broker
Read more